The people were looking for him and when they came to where he was, they tried to keep him from leaving them.  But he said, “I must proclaim the good news of the kingdom of God to the other towns also, because that is why I was sent.”

That’s what they did in Capernaum. 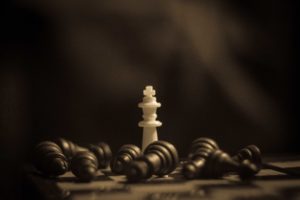 These teachings and exorcisms and healings were not an end in themselves. They were the means by which Jesus revealed that he really is the Divine King he said he was. By demonstrating the authority of God’s Kingdom, he showed them what he was telling them.

Is he still the same Jesus?

He is still the Jesus…

…whose teaching will turn your life upside down.

…whose words must be heeded, believed, and obeyed.

…who can deliver people from the power of darkness.

…who can set people free from sin and its constant oppression.

…who can heal the sick, raise the dead, and transform the sufferers into servants.

His authority is not diminished by the years. In fact, we should say that his authority has only grown. Every time the gospel of his kingdom is preached and believed, new people and people groups come under his loving rule.

Of course, his authority can still be ignored, rejected, mocked, and challenged today. It often is. But that in no way diminishes the truth. Jesus is the Divine King with divine authority. He showed it from the start by the authority of his teaching, by his authority over spiritual powers and disease.

He is still the King. Will you recognise his rightful authority today?