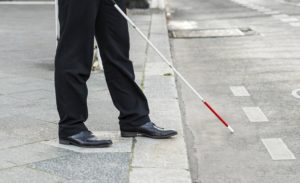 One Sunday, right after the morning service, Ramel and I drove down to the Oregon coast. We went to Lincoln City by way of Salem, then slowly made our way south down Highway 101 until we found a little motel with a vacancy sign. We rented a place right on the beach, overlooking the ocean. Our kitchen-suite had a fireplace and a big window where we could sit and watch the sun go down. It was beautiful and very restful. I woke up in the middle of the night with a bright light shining in my eyes. It was the moon casting its light over the water, making every wave look as though it were decorated with a million jewels. I got up and sat by the window for a long time, marvelling at the beauty of God's creation. The memory of that experience is still etched on my mind as though it were yesterday.

I cannot imagine what it would be like to be blind. I lost one of my five senses, the sense of smell. It happened back in 1981 in an unfortunate accident in which I was nearly electrocuted and it resulted in the complete severing of the olfactory nerve to the brain, thus taking away my ability to smell or taste. As you can imagine, that has been an inconvenience. However, my loss is nothing compared to a person losing his sight or hearing. To live in a world of darkness or a world of silence—either one would be vastly worse than my affliction.

We depend on sight for so much. There is an old saying that goes, "Seeing is believing." It means that we verify reality by what we can observe with our eyes. We believe something because it is right there in front of us in plain sight. But our eyes can be deceived. Any police officer can tell you that so-called “eyewitnesses” are often totally mistaken in identifying suspects. And everyone has seen optical illusions that trick the brain into thinking it is seeing something when it is not. Our minds tell us that what we see is impossible. But there it is. It must be true, because seeing is believing, right?

One of the most well-known stories of the New Testament is the one found in John chapter 20 about "Doubting Thomas." After the resurrection, Jesus appeared to the disciples gathered in the upper room. But Thomas was not there on that occasion. When told of the Lord's visit he said that he would not believe it unless he saw the risen Lord with his own two eyes. For him, seeing was believing. Shortly after that Jesus appeared again to His disciples, but that time Thomas was present. Upon seeing the Lord Thomas knelt before Jesus and made that beautiful declaration of faith, "My Lord, and my God."

But even more remarkable are Jesus' words to Thomas in verse 29. He said, "Thomas because you have seen Me, you have believed. Blessed are those who have not seen and yet have believed."

The eyes of faith—these are the eyes of the soul that come open when we believe on the Lord Jesus, that wonderful moment when believing becomes seeing. In 2 Corinthians 3 the apostle Paul is writing about the spiritual blindness of his people, the Jews. In verse 14 he writes, "But their minds were made dull, for to this day the same veil remains when the old covenant is read. It has not been removed, because only in Christ is it taken away. Even to this day when Moses is read, a veil covers their hearts. But whenever anyone turns to the Lord, the veil is taken away." A few verses later he writes, "And if our Gospel is veiled, it is veiled to those who are perishing. The god of this age has blinded the minds of unbelievers, so that they cannot see the light of the Gospel of the glory of Christ, who is the image of God." This is what we call "spiritual blindness."

Peter speaks of this phenomenon of "believing is seeing" in 1 Peter 1:6-8, "In this you greatly rejoice, though now for a little while you may have had to suffer grief in all kinds of trials. These have come so that your faith—of greater worth than gold, which perishes even though refined by fire—may be proved genuine and may result in praise, glory, and honour when Jesus Christ is revealed. Though you have not seen Him, you love Him; and even though you do not see Him now, you believe in Him and are filled with a joy inexpressible and full of glory."

There are many things that exist, that are real, that I cannot see with my physical eyes—love, joy, peace, friendship, honesty—these are not visible to the naked eye, yet they are real nonetheless. I have never seen Jesus with my physical eyes, yet I know He is real, and I can see Him with the eyes of faith. Believing is seeing. One day we will stand before Him and will see Him face to face, but that will only be the icing on the cake.

Walking by faith, not by sight,